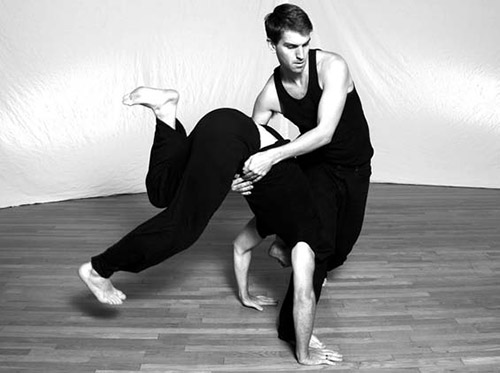 Grounded in the mime, modern dance and dance/theater explorations of Paris in the late 1970’s, and expanded through 30 years of studio training with actors, Loui Movement Technique releases the physical/emotional honesty of actors. This is a training of energy and weight exchange in which the ultimate goal is kinetic and intimate responsiveness to a partner. The playful, dynamic and exhilarating shifts of counter-balance that characterize this work are reached through the practice of contact improvisation. Basic tumbling, energy exchange exercises and partnering dance lifts are its fundamental building blocks. A good contact session taken into text allows the spontaneous physical language of the actors’ bodies to parallel the spoken dialogue. Without consciously imposing objectives actors inter-relate spontaneously, dynamically and elegantly; and the outcome is an imprinted ability to deliver emotional and physical honesty in a scene.

Counter-balance Theater uses this technique to train performers within the company, in classes at UCI, and in workshops for the wider public. The physical techniques in leveraging, complicit interchange and trajectory of motion, are used to create the imagery scored in the Counter-Balance scripts.

Counter-balance intensive workshops in Devising focus on creating these scripts – organizing the scenario detailing imagery, text and sound, and the direct application of Loui Movement Technique for physical theater story-telling. Devising workshops also detail the practical creative processes adapting literature for the stage: from inception of idea to scripting, through a disciplined and inclusive rehearsal process, through to production.

As seen in Routledge’s Theater Dance and Performance Training (TDPT) »

Having explored scenes through contact improvisation, we started working on monologues, where one person is speaking their text to a silent, but responsive partner. We found that the physical engagement with that normally invisible “other” allowed a freedom of emotion for the speaker, and a visceral connection to language that was so highly charged that it dictated separation of thoughts. The text becomes a necessary expression of ideas. Once a clear commitment to the “other” and the intention of the text is achieved, the silent partner moves away and the actor works on his own.The resulting “realistic” monologue, now done without movement and without partner, is personal and intensely embodied. Reminded to “share” with the room, Blake delivers a fully committed audition monologue to the audience in the room.This video is an example of a very responsive partnering with a monologue. The text of the scene can be found below the video.

If you have tears, prepare to shed them now.
You all do know this mantle: I remember
The first time ever Caesar put it on;
‘Twas on a summer’s evening, in his tent,
That day he overcame the Nervii:
Look, in this place ran Cassius’ dagger through:
See what a rent the envious Casca made:
Through this the well-beloved Brutus stabb’d;
And as he pluck’d his cursed steel away,
Mark how the blood of Caesar follow’d it,
As rushing out of doors, to be resolved
If Brutus so unkindly knock’d, or no;
For Brutus, as you know, was Caesar’s angel:
Judge, O you gods, how dearly Caesar loved him!
This was the most unkindest cut of all;
For when the noble Caesar saw him stab,
Ingratitude, more strong than traitors’ arms,
Quite vanquish’d him: then burst his mighty heart;
And, in his mantle muffling up his face,
Even at the base of Pompey’s statue,
Which all the while ran blood, great Caesar fell.
O, what a fall was there, my countrymen!
Then I, and you, and all of us fell down,
Whilst bloody treason flourish’d over us.